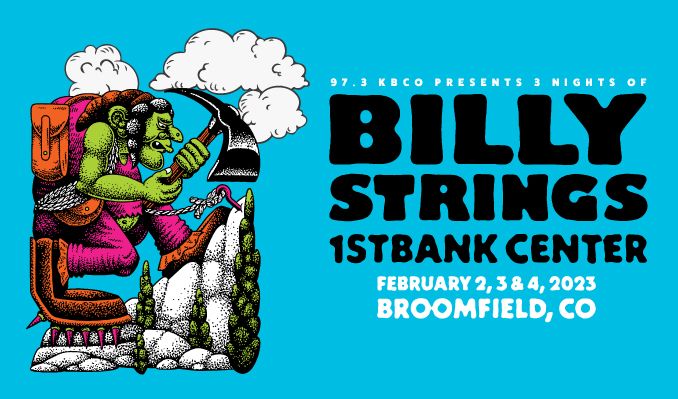 There is a strict 4 ticket limit per show. Additional orders exceeding the ticket limit may be cancelled without notice. This includes orders associated with the same name, e-mail address, billing address, credit card number, and/or other information.

Raised in Michigan and now based in Nashville,  GRAMMY Award-winning singer, songwriter and musician Billy Strings  is known as one of music’s most compelling artists. Since his 2017 debut, he has been awarded Best Bluegrass Album at the 63rd GRAMMY Awards, Artist of the Year at the 2022 Americana Music Awards, Entertainer of the Year and Song of the Year at the 2022 International Bluegrass Music Association Awards, Best New Headliner at the 2022 Pollstar Awards, Breakthrough Artist of the Pandemic at the 2021 Pollstar Awards, named Entertainer of the Year and Guitar Player of the Year at the IBMA Awards and has performed on “The Late Show with Stephen Colbert,” “Jimmy Kimmel Live!,” PBS’ “Austin City Limits” and “Bluegrass Underground.” A respected figure across all genres, Strings has also collaborated with a wide variety of artists including Post Malone, Bill Kreutzmann, Bob Weir, Luke Combs, RMR and many more.

Official WebsiteFacebookTwitterMore Info
*Service and handling fees are added to the price of each ticket.