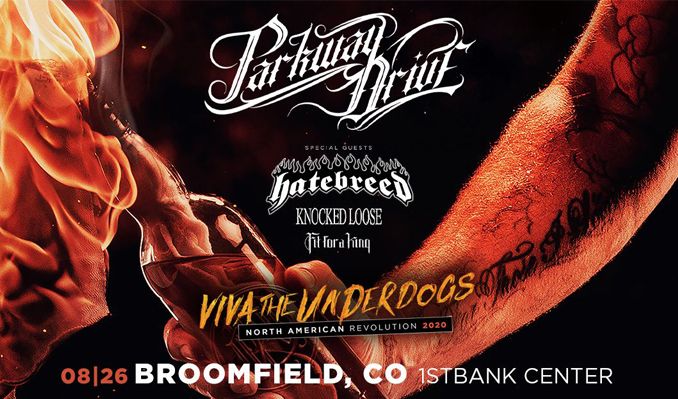 When it was time to record the opening track to their sixth album Reverence, Parkway Drive decided to immerse the studio in total darkness. For the Byron Bay, Australia-based metal band, complete lack of light was the only way to truly capture the mood of “Wishing Wells”: a brutally haunting track whose sound frontman Winston McCall accurately describes as “like anvils falling out of a storm cloud.”

“I wanted to feel uncomfortable, so we turned the lights off and got to cranking the heating up, so I was sweating,” says McCall, whose bandmates include guitarists Luke Kilpatrick and Jeff Ling, bassist Jia O’Connor, and drummer Ben Gordon. “The other guys on the other side of the screen couldn’t see us—they would hear the wild takes and then I would walk up to the glass and peer in. It was like an apparition at the glass going, ‘Is that okay?’”

Reverence arrives as the follow-up to 2015’s Ire—Parkway Drive’s most hugely successful album to date and a major force in boosting their ever-growing worldwide following. Like each album released since the band formed in 2002, Ire has been certified gold in their homeland; it also helped fuel their recent dominance at European festivals and won critical praise from outlets like Kerrang (who hailed Ire as a “fascinating album”). But while Ire brought Parkway Drive’s uncompromising artistry to bold new levels, Reverence pushes their creative ambition even further.

“In the past we’ve dipped our toes in with certain concepts and parts—a little strings here and there,” says McCall. “But on this record, we soaked everything in it. When we used strings, we fucking used those strings. When there was singing with melody, we went in completely and made sure we executed it correctly. That goes for all of the stuff we’ve done on Reverence.”

Not only Parkway Drive’s most sonically adventurous album so far, Reverence is also their most personal. With its barrage of heart-shredding anthems, the album was closely informed by a series of tragedies the band’s endured over the past few years, including the untimely loss of two loved ones. “We realized how short and fragile life could be,” says McCall. “We took stock of what we had and realized what actually mattered. What we went through was horrendous.”

Produced by longtime Parkway Drive sound engineer George Hadjichristou and recorded at All Buttons In Recording Studio in Ottawa, Reverence both expands the band’s sonic palette and offers up their most devastating songs yet. To intensify the ominous atmosphere of “Cemetery Bloom,” for instance, Parkway Drive introduced menacing synth lines and opera-esque backing vocals. “Those are probably my favorite lyrics I’ve ever written,” says McCall of “Cemetery Bloom,” a dark-hearted ballad detailing what it’s like to operate as “destroyer” in a relationship. “It sounds like the theme to a battle—one you have to fly over mountains to get to. It’s taking place somewhere on the horizon and when you find yourself in the middle of complete chaos, that’s when you discover exactly what the song is about.”

On tracks like “The Void”—whose refrain of “Welcome to a world of pain” brilliantly embodies the tone of Reverence—Parkway Drive channel their furious energy into thrashing rhythms and ferocious vocal work while delivering deeply infectious melodies. That energy also infuses such songs as the vital and volatile “Prey,” a gang-vocal-driven anthem that unfolds in both punishing riffs and intricate guitar lines.

One of the most wrenching moments on Reverence, closing track “The Colour Of Leaving” was particularly harrowing to record. “I wrote the words wanting them to be as personal as possible, but every time I looked at them I didn’t know whether I could sing it,” says McCall, adding that the lyrics were written in the aftermath of two overwhelming losses. “I did four takes and we had to choose the one where I wasn’t blubbering, where I had my shit together to the best degree by the end of the song. I can’t spit that song out without it not affecting me. It stills does that, I well up every time I hear it.”

Reverence first came to life in Ling’s basement space in 2016, during breaks from Parkway Drive’s rigorous touring schedule. With their determined experimentation sometimes yielding up to 30 versions of the same song, Parkway Drive were especially focused on the character of the vocals. “It 100% didn’t matter whether I was performing the deep scream or screeching the high scream, or sounding tough,” says McCall. “Our attitude was, ‘Does the vocal performance carry character?’ It didn’t have to be pitch-perfect on everything. It didn’t have to sound sweet and great, or nasty. Every single song and moment on the record has to carry character in a genuine way.”

Known for their unstoppable live show—as showcased in releases like the platinum-selling Home Is For The Heartless DVD—Parkway Drive will spend most of the coming year on the road. After touring the U.S. this spring, they’ll head to Europe/UK to headline several major festivals, taking on a massive stage production that includes a spinning drum room and stunning pyrotechnics. The band will then return to the states for their biggest U.S. tour yet, a run to be followed by their mid-autumn tour of Australia. Early next year, Parkway Drive will again bring their awe-inspiring show to Europe/UK and—in a significant step forward for the band—hit arenas all across the continent.

In reflecting on the making of Reverence, Parkway Drive point out that using heartbreak as creative fuel has ultimately had a life-changing impact on the band. “This time there are triumphs that come from swinging a sledgehammer and dealing with real raw emotion,” says McCall. “I hope Reverence is the kind of album that redefines what people expect of us, in the sense that you can now expect the unexpected. This time around we’ve taken more risks, and I don’t think we’ve ever sounded more interesting.”

Official WebsiteFacebookYouTubeMore InfoTwitter
*Service and handling fees are added to the price of each ticket.